It's Throwback Thursday and we are going way old school for this one! Check out this 1958 Buick commercial!

Posted by Capital Buick GMC at 11:52 AM No comments:

The Next Generation of GM Trucks

Jeff Luke got his first pickup truck when he was a teenager and says, "I just love them." As Executive Chief Engineer for GM full-size trucks Jeff is now launching the next generation which promise to be the most refined and best engineered full-size pickups in the market.


Posted by Capital Buick GMC at 3:02 PM No comments:

The automaker also expects the Encore to continue the brand’s momentum among younger buyers and people who don’t own a GM product.

Tony DiSalle, vice president of marketing for Buick and GMC, said dealers are reporting “twice as many hand-raisers for Encore as for Verano” when that vehicle was released in late 2011.
The brand’s overall conquest average rose from 27% to 43% over the last half decade. More than 50% of Verano buyers are new to Buick.

“That’s part of the mission for this brand,” DiSalle said this morning. “Verano is really the conquest leader in the pack, so we’d anticipate Encore to also conquest well for the brand.”

The five-seat Encore enters a relatively new segment of small crossovers that several automakers believe will balloon in size over the next few years. GM believes it will appeal especially to young professionals and empty-nesters.

The crossover ranges in price from $24,950 for the basic model to $28,840 for the premium package with combined average fuel economy of 28 miles per gallon on the front-wheel drive version.
The Encore’s introduction comes as the average age of Buick buyers has fallen over the last five years from 64 to 57. GM says Buick is the only major brand in the U.S. to lower its average age over that time.

“Now that we’ve got a second crossover in the portfolio we’re going to see new folks again coming into the showroom,” said Lloyd Biermann, marketing manager for the Buick Enclave and Encore crossovers. “They’re going to be younger, as well.”

The Encore could compete against vehicles like the Volkswagen Tiguan and the forthcoming Fiat 500L. GM said it expects 60% of Encore buyers to be women.

“Here’s what we see at auto shows: ‘Wow, I never knew I needed one until I saw it, I didn’t know it existed,’” DiSalle said.

Built in South Korea, the Encore is badged as the Opel Mokka in the European market. In China, Buick’s biggest market, dealers ordered 6,000 Encores in the vehicle’s first month this fall.


Courtesy of Buick
Posted by Capital Buick GMC at 2:20 PM No comments: 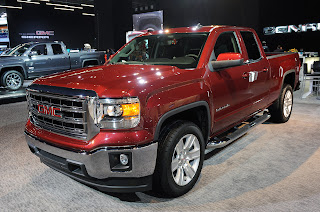 There could hardly be more riding on the next-generation General Motors full-size pickup trucks, so the automaker has wisely made sure to have a selection of different models on hand at the Detroit Auto Show to show off. The 2014 Chevrolet Silverado and 2014 GMC Sierra were both officially introduced last month at a stand-alone reveal, and now they'll be on display for the public to see in various body configurations and trim levels.

The Silverado LTZ Crew Cab and Sierra SLE Extended Cab are aimed at providing more of a high-end pickup experience, while the Silverado LT Z71 Extended Cab and Sierra SLT Z71 Crew Cab should have off-road fans scouting out their favorite trails. The crew cab trucks won't go into production until sometime during the second quarter of this year – with other bodystyles coming later in the year.


Courtesy of Autoblog
Posted by Capital Buick GMC at 2:44 PM No comments:

GM Foundation and Buick to grant 1,100 scholarships for third year. 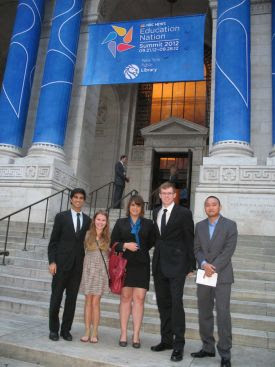 This is the third year the 1,100 Buick Achiever Scholarships will be awarded to students who excel in both the classroom and in the community and are pursuing degrees in engineering, design, information technology and business-related majors in the auto industry.

The annual Buick Achievers Scholarship Program was created in 2011, and has awarded nearly $12 million in scholarships. Through the program, 100 high school or current undergraduate students receive scholarships up to $25,000 a year, renewable for up to four years and one additional year for qualified five-year engineering programs.

“Since the inception of the Buick Achievers Scholarship Program, we have provided scholarships to more than 2,000 students from all 50 states,” said GM Foundation President Vivian Pickard. “This scholarship helps to change the lives of its recipients, making it more affordable for them to receive a higher education.”

More than 120 military veterans or dependents of military personnel and more than 1,000 students who are first in their family to attend college have received Buick Achievers scholarships.

“The Buick Achievers Scholarship has been such an amazing blessing for me and my family,” said Tommy Jones, a junior mechanical engineering major at Freed-Hardeman University in Henderson, Tenn., and a $25,000 scholarship recipient in 2012. “I’ve always had a passion for science and through this scholarship, I can pursue my dream of becoming an engineer without financial burden.”

Posted by Capital Buick GMC at 7:20 PM No comments:

Thanks for the great tip, Michael!

Posted by Capital Buick GMC at 3:58 PM No comments:

Happy New Year! Now’s the time when people everywhere are making New Year’s resolutions, breaking ones they’ve already set, or are setting more achievable resolutions. To inspire you, here are some fun ways the most popular resolutions can be applied to your car maintenance and vehicle care:

Posted by Capital Buick GMC at 11:44 AM No comments:

Capital Buick GMC
“Leading Atlanta since 1931” Capital Buick GMC, your Smyrna Buick, Smyrna GMC dealer would like to welcome you! Whether you're researching new Buick or GMC vehicles or are ready to buy or lease, serving Atlanta, Chamblee Buick GMC dealer conveniently located near the Cobb Galleria and Cumberland Mall has you covered! We proudly serve the communities of Atlanta, Marietta, Sandy Springs, and Chamblee as your premier Buick & GMC dealer in Smyrna, GA.